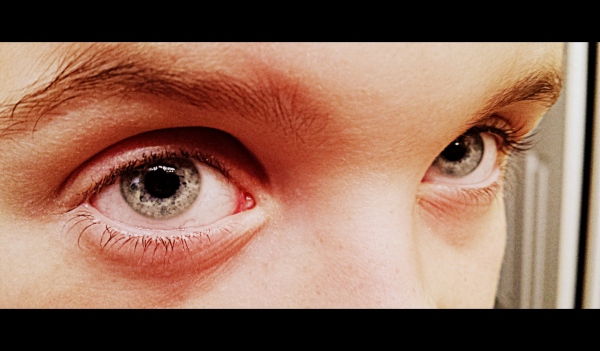 The Young Love’s Eyelashes, after about 3 weeks of Xbox-induced restraint.

A while back, I posted about my child’s Trichotillomania in the form of eyelash-pulling.

I’m happy to report that the young love’s eyelashes are growing in pretty well. His right eyelid looks constantly a little puffy and dry, but I don’t think he’s pulling much, and the left eye looks really good. Getting closer to that Xbox every day!

I thought it was interesting comparing our eyes. I do think he has my same eye shape, though his eyes are an aqua-blue like Hubby’s while mine are greenish hazel, depending on the light. You’ll notice I had to soften mine a bit so as to mask some unattractive wrinkles. LOL

My profession is veterinary medicine. My earliest self impression was Bookworm. My husband is far and away my best friend, and my offspring are my greatest amusement. And when I discover something I... shall we say... enjoy, I immerse myself completely. Over the years it's been fossil collecting, reef-keeping, air plants, floral arrangements, quilting. In 2014 it seems to be Richard Armitage. I've never been in a fandom. I've never shown more than a distant appreciation for a celebrity. I've never thought to blog. It all changed right about the moment John Thornton shouted "Stephens!" And my life has not been quite the same since.