In light of all the discussion of the Stage Door in wake of Saturday Sept 13th’s mobbing of Richard Armitage, I almost cringe to admit that on two occasions I found myself back outside the Stage Door, a member of the early queues that formed before those attending the evening performance were dismissed. This happened in spite of my own mild frustration, earlier in the summer, with the stage door repeaters. Please, don’t take offense, all of you repeaters out there. I am one of you! I totally get it. But back in July, I was privately of the opinion that to turn up repeatedly at the Stage Door was unfair both to Armitage, whose time was completely voluntary and who began to look increasingly weary in SD photos, and to those of us who had tickets later in the run, as I was convinced RA would at some point decide, out of exhaustion, that he was just no longer up to it.

As the weeks progressed, and Richard continued to appear, albeit ever more speedily, I stopped worrying for my own selfish desires, although I continued to have low level anxiety on his behalf. (I know, RA knows what he’s doing, and doesn’t need me monitoring him for weary half-smiles and puffy eyelids!) At any rate, I obviously don’t stick to my own convictions when presented with temptation, because for each performance I went to, there was a Stage Door experience to accompany it, and only one of those actually happened on the same night I’d been attending The Crucible.

Monday Sept 1:
It was about 10:30pm, after a lovely day out at Kew Gardens, a brief rest at the hotel, and a leisurely dinner in the near vicinity of The Old Vic. On our way back to the hotel, we “happened” passed the theatre, where the play was in progress. (That’s total B.S… I planned it and timed it, just didn’t mention it to Mom!) By this point, I’d seen two evening performances, but never had bought any of the posters, which made a convenient excuse. I went inside and purchased a bare shoulder poster, and here it should be noted that I missed my opportunity to purchase the poster I really liked the most, which features eyelashes that rival any I’ve ever seen, because it was available that night. However, I only had enough cash on me for one, and as I was already pretty sure I was going to head right for the Stage Door, and had nothing for RA to sign with me, I selected the poster I thought would best show an autograph.

Then, while Mom expressed laughing disbelief, I had to step down the street and say hi to the couple of ladies already at the stage door, didn’t I? The four of us were in the front of the line- Irache, a young nurse from Spain, then Mom and me, then Joan, an expectant grandma from California. Irache and Joan were both just lovely. We had about a half hour to chat and plan our moves. Irache said she was not a professional photographer, but she sure had an intimidatingly large camera, while Joan and I just had our smartphones. I believe all of us had been to the Stage Door at least once, and we knew we’d need to be fast in order for the three admirers among us to have photos with Richard, and Irache and I also hoped for an autograph. Irache was quite impressively organized, having pre-set and tested her camera, and she’d also brought along hard writing surfaces for autographs; in contrast, Joan and I just sort of showed up. Lol. Our little group coordinated a battle plan down to the last detail, literally choreographing each move! CRAzy, I know. But it paid off. I held Irache’s camera, Mom held my cell phone, Joan held my poster, and Irache held Joan’s cell phone. I am happy to report that the plan went off without any hitches, and each of our respective photos turned out pretty well.

This was the evening before the Conversation, but I was later to learn that Richard Armitage admitted the Stage Door was a somewhat surreal experience for him, as he was still shedding John Proctor. That Monday night, we were the first faces he saw. When he came out, he did look slightly vague, more so than on Saturday, when I encountered him much further along in the queue. The door opened, Ola emerged, and then there was Richard, with a muted smile and pretty blank expression, like he was friendly and ready to start, but almost didn’t know what to say. We stared at him, and since I hadn’t been at the performance, I’m ashamed to say I didn’t think to thank him or compliment him. *Kicks self, for the thousandth time!*

I believe there were a few seconds of silence while he waited for one of us to say something, but everyone was just silent! Struck dumb by his loveliness, I suppose. I absolutely cringe to think it, but it wouldn’t surprise me if all our mouths were hanging open. Heaven above, I hope not! Now this is from Mom, who keeps a cool head around Richard, but she says he started with “Ah, hello.” At which point, Irache started forward with her items to be signed. Anyway, in retrospect, right there at the start of the Stage Door queue, when he was more or less 10 min out of John Proctor, he did indeed seem a little disconnected, but it really was not at all in an unfriendly way. 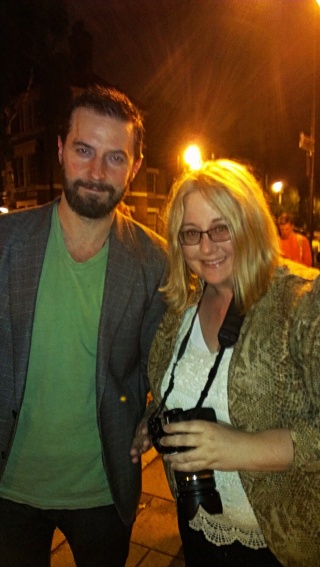 Mom snapped a photo of Richard signing Irache’s materials, I snapped a posed photo of him with Irache, and then it was my turn with him. He was in the green t-shirt and grey jacket and jeans combo. Sorry to say I forgot to look at his footwear, and once again I lost my wits and have no idea what I said or what he said, except that it was cordial! Mom was concentrating on not messing up with my cell phone camera, so she wasn’t paying attention. Richard very graciously leaned in for a photo, which I later posted to twitter, and this time he had his hands clasped politely behind his back. The photo is decent, for a cell phone, but there is an unfortunate light bulb on my head, as if I’ve just had a very bright idea, when in fact I had no coherent thoughts at all, or I might have indicated somehow to Richard how moved I had been, how sublime his performances were, that I hoped he’d narrate another audiobook… just anything intelligent at all. Unfortunately, or perhaps fortunately for me, I don’t recall what was said.

I really hope it wasn’t “Squeee!”

My profession is veterinary medicine. My earliest self impression was Bookworm. My husband is far and away my best friend, and my offspring are my greatest amusement. And when I discover something I... shall we say... enjoy, I immerse myself completely. Over the years it's been fossil collecting, reef-keeping, air plants, floral arrangements, quilting. In 2014 it seems to be Richard Armitage. I've never been in a fandom. I've never shown more than a distant appreciation for a celebrity. I've never thought to blog. It all changed right about the moment John Thornton shouted "Stephens!" And my life has not been quite the same since.